This weekend I finally got around to picking up Neo Scavenger. I have fiddled around with the demo a little in the past, but never got too far. So, I finally took the plunge and picked up a copy on Steam. Neo Scavenger is a single-player survival game set in the aftermath of some unspoken apocalypse. It features a semi-randomly generated map, a decent crafting system, turn based combat and movement, and a lot of inventory management along the way. I’m currently on my best ever playthrough having survived about two weeks so far (EDIT: I just died at exactly 14 days). 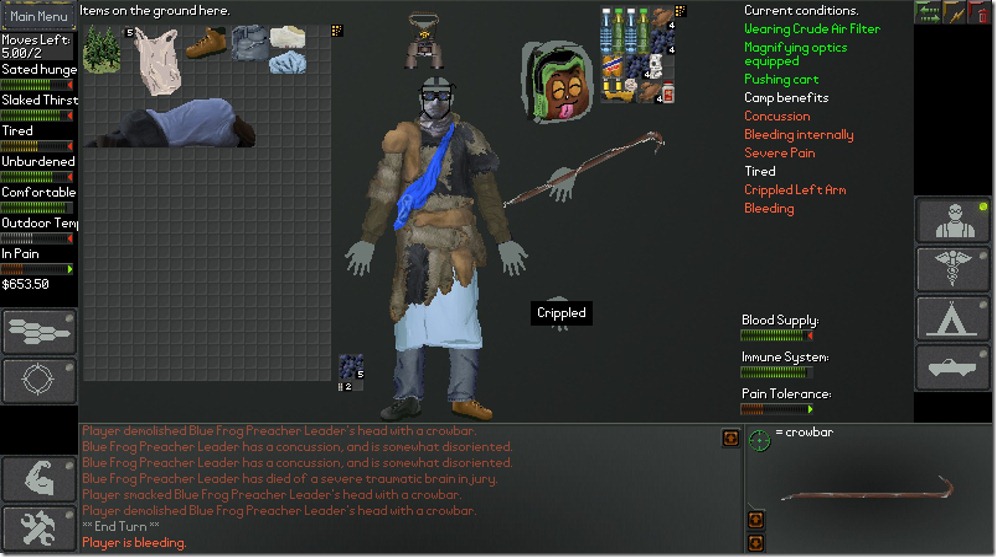 There are many ways to die in Neo Scavenger. Wounds from combat, a scratch obtained whilst looting a building becoming infected, sickness caused by drinking unsterilized water, starvation, thirst, a roof falling in on you whilst trying to scavenge for plastic bags, hypothermia and so on. It can be a little hard to get started in the game, as it always starts the same way; with you waking up in a cryo facility with a mutant creature trying to reach you through a broken door, with nothing to your name except a hospital gown. If you don’t find some decent clothing very quickly, you are at risk of dying of exposure before your adventure even gets going. However, like a lot of survival games, things do become easier the longer you survive and the more resources you acquire along the way.

Storage is a major gameplay element, and new characters can only carry what they can put in each hand. There are many containers available in the game, but finding them can take a bit of time. I currently sport a children’s backpack, a plastic carrier bag, and whatever I can fit into my pockets. You will frequently face dilemmas about whether to hang onto that multi-tool, just in case it’s useful later, or to pick up some wood which could be used to start a fire, so crucial for sterilizing water and rags for first aid. The game utilises a Tetris style inventory system, with players able to rotate things to maximise the available space for items. I’m personally a fan of games which encourage tough decisions, and I’m finding that Neo Scavenger’s loot system is excellent at it.

The map is divided into hexes, and symbols indicate when there are items to be picked up or scavenged in each hex. Scavenging produces the best items, but takes time to complete and carries some risks too. There are certain events that can sometimes be triggered during scavenging, such as a roof fall, or the rotten floorboards giving way beneath your feet. These are usually survivable, but due to the games fairly in depth medical systems, can cause problems later. Perhaps a small wound will fester without antibiotics for example. I’m currently playing a character with skills in botany, so I am able to visit areas of the wilderness and scavenge for edible berries or mushrooms. If I had picked trapping instead, I would presumably be able to seek out game whilst scavenging. But, as I mentioned, this all takes time, or in Neo Scavenger, turns.  Everything is turn based in Neo Scavenger. Crafting, looting, scavenging, all take turns to complete. There is also a day and night cycle in the game, and when night falls visibility drops, so you’ll want to try and find a building to hunker down in for the night, preferably with a tent or a sleeping bag if you’re lucky enough to have found one. 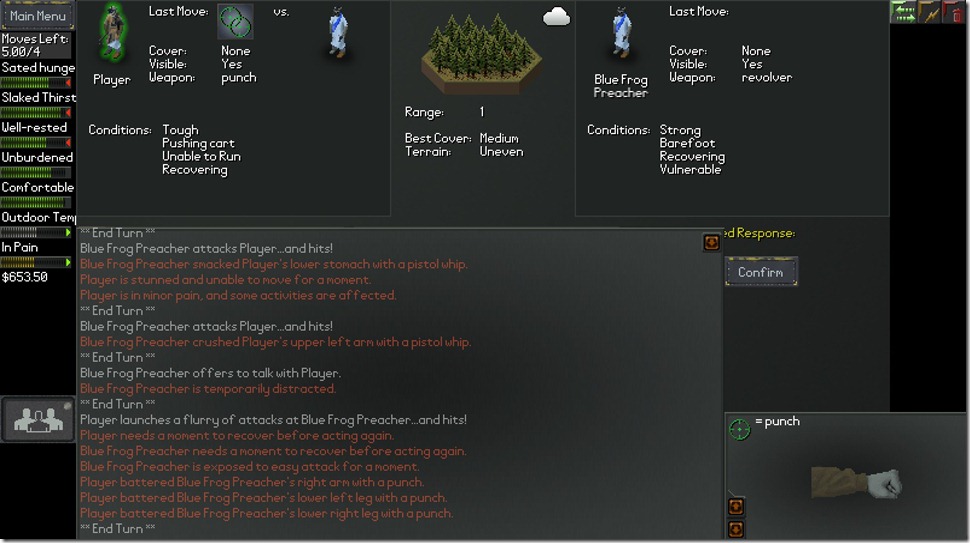 Combat too, takes place in turns. But combat in Neo Scavenger is not a neat and tidy affair. It is desperate, clumsy, and panic inducing. The game provides you with a fair few options during a combat encounter, including the abilities to run or hide from your opponent, which may be wise if they appear better armed than you. However should you decide to fight, then I feel the game does an excellent job of portraying people who aren’t very good at killing trying to kill one another. Perhaps you’ll take a swing at someone with a crowbar and miss, falling to the floor. You try to get up but are hit by your opponent who also falls down. You crawl away, get up and manage to hit them this time. The blow to their stomach causes them to start coughing up blood and choking on it, leaving you to mercilessly beat them to death. It can so easily go the other way though, and because of this combat encounters are usually quite exciting affairs.

I’ve always been a big fan of survival games, and so far Neo Scavenger is looking like one of the best. You can find the game on Steam, or check out the demo available from Blue Bottle Games here.